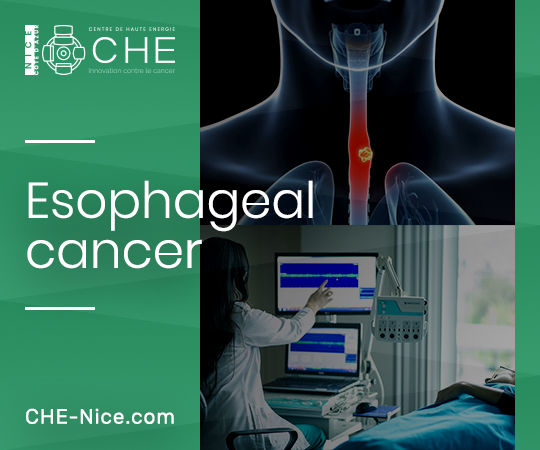 Esophageal cancer
Esophageal cancer
There are two types of esophagus cancer:
Diagnostic symptoms are a feeling of blockage during passage at the esophagus level (dysphagia in the solid tissues), palpation of the mass, swollen lymph nodes in the neck. Pain during passage of food (odynophagia). Rapid weight loss within a few months, along with fatigue, are possible clinical signs. Adenocarcinomas are most often located in the lower third of the esophagus or at the junction of the esophagus and stomach. Advanced diagnostics include performing PET with 18 FDG to clearly distinguish between the tumor and pathological lymph nodes and to check for the possible presence of metastases.

When choosing a treatment, two approaches can be proposed: radiation therapy from 23 to 28 sessions in combination with chemotherapy or carboplatin such as taxol, or folfox 4, followed by therapeutic excision surgery, if possible. Or radiotherapy in 28 sessions, together with exclusive chemotherapy, or carboplatin taxol or folfox 4 (LV5 FU2 and oxaliplatin). The second approach to treatment excludes surgery. Then monitoring is proposed with a clinical examination, blood test and subsequent screening after 8 weeks of treatment, and then every three months.
Show map
High Energy Center offers the most advanced cancer treatments for local and foreign patients.