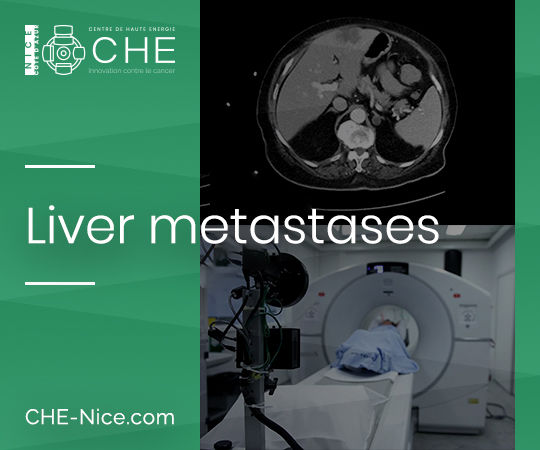 Liver metastases are secondary cancers caused by the oncology of other organs.

There may be one multiple liver metastases. Usually, liver metastases are asymptomatic. According to the results of the tests, a violation of the balance of the liver with cytolysis of the liver and an increase in ASAT and ALAT can be observed.
In the later stages or in the case of blocking the lesion of the main bile duct, there may be clinical jaundice (yellow eyes and skin, together with itching, pain in the upper right abdomen (right hypochondrium) and edema with water in the abdomen (ascites).

MRI with gadolinium injection or computed tomography with contrast iodine helps determine the exact location and number of metastases. A chest, abdomen and pelvis scanner with a contrast iodine marker or PET with 18 FDG can complement the diagnosis and determine the location of the primary tumor and the metastases themselves. Blood tumor markers help determine the origin of primary cancer (e.g., ACE, carcinoembryonic antigen).

A total colonoscopy is performed if the doctor suspects primary colorectal cancer. There are different types of treatment. This will depend on the type of primary tumor, the amount and place of metastases. Systemic treatment is chemotherapy, targeted therapy, or immunotherapy.

Chemotherapy is the treatment most commonly used to treat liver metastases. It is used to help stop or slow the growth of a tumor and relieve symptoms. It can also be performed before surgery to reduce the size of the tumor, or after, to reduce the risk of cancer recurring (relapse).
Chemotherapy is sometimes used in combination with other treatments, such as targeted therapy. In the case of metastases that are limited in number and size, local methods of treatment can be performed, such as surgical intervention (removal of the lobe of the liver), radiofrequency radiation (interventional radiology), or stereotactic radiotherapy.

If possible, surgery remains the standard treatment; it consists in resection of a part of the liver, most often of the lobe.

Radiofrequency ablation involves the destruction of the lesion by heat being administered to the tumor using a needle guided by visual screening, such as an ultrasound scan or computed tomography / scanner. Stereotactic radiotherapy is usually indicated if there are less than three liver lesions. During stereotactic radiotherapy, a high dose of x-rays is delivered to metastases. Usually, three sessions of 12-15 Gy are performed, one session per day, three sessions per week. The number of sessions depends on the place and size of the metastases to be treated, and the volume of a healthy liver.
Show map
High Energy Center offers the most advanced cancer treatments for local and foreign patients.